The 200 A / 2000 A current clamp allows you to measure up to 2000 amps without cutting, or disconnecting or stripping wires. Simply clamp the jaws around the cable to be tested and plug the clamp into your PicoScope.

The 200 A / 2000 A current clamp allows you to measure up to 2000 amps without cutting, or disconnecting or stripping wires. Simply clamp the jaws around the cable to be tested and plug the clamp into your PicoScope.

Before the launch of this probe we recommended the TA019 (600 A) for working on the starting and charging systems of petrol passenger cars and the PP253 (2000 A) clamp for high compression diesel engines. The TA167 (200 A / 2000 A) covers both these applications in one probe with improved range and sensitivity, lower noise and faster response.

The TA167 features a 200 A mode for better performance at lower currents and has an increased jaw size. It also features an auto power-down facility to save battery life when not in use (this feature can be disabled for battery drain / shutdown current testing).

A review of this current probe is available on the Pico forum.

Pico’s full range of Current clamps for use with oscilloscopes or multimeters is available to view online. 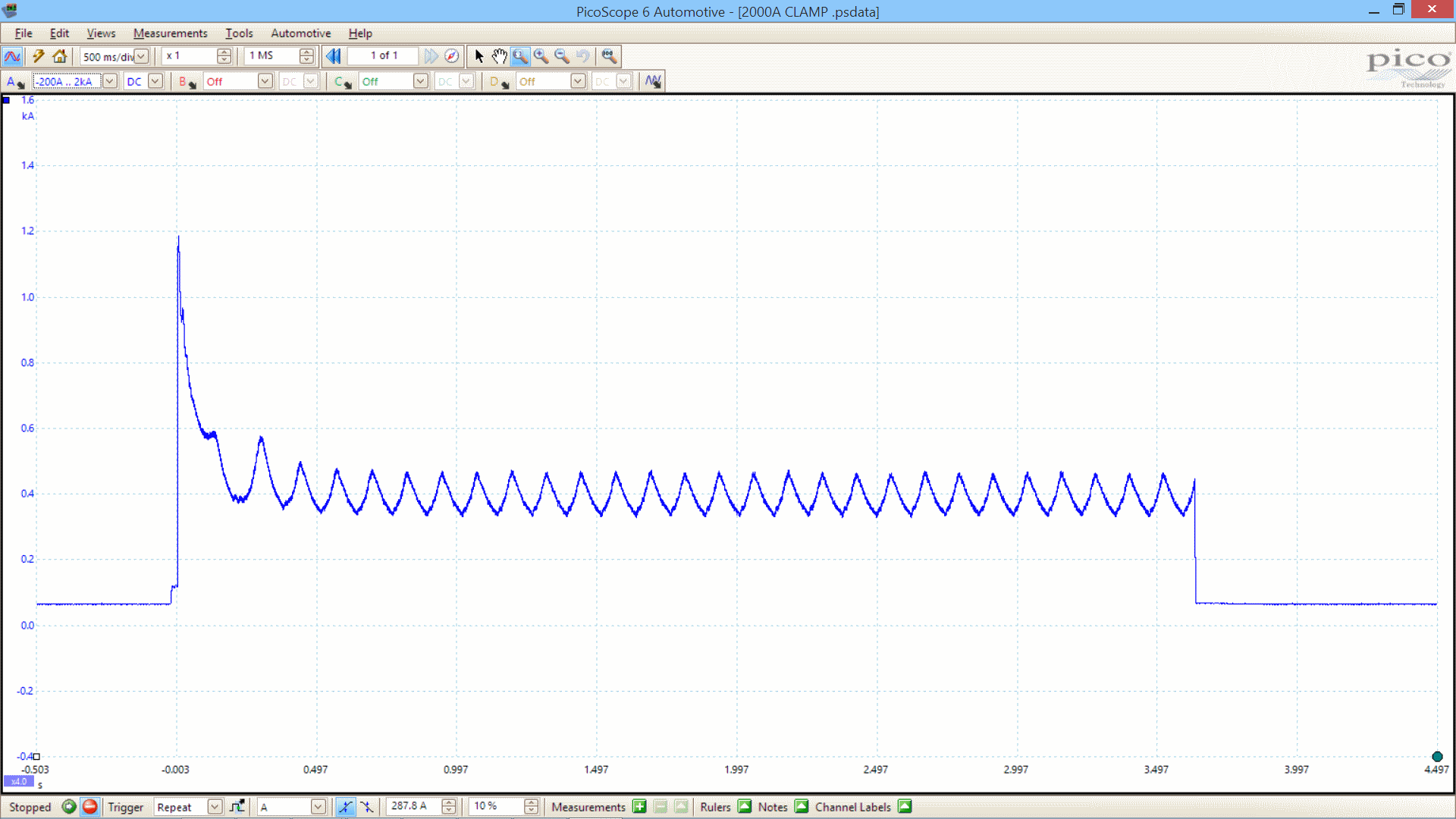 The wide range of this clamp allows currents to be measured from under 1 amp right up to 2000 amps. It can therefore be used with a PicoScope for many applications including:

On the 200 A range the TA167 can also be used many applications where a “low amps” clamp would normally be required such as checking injector and ignition current.

Switch on
When the probe is switched on to the required measuring range, the green LED will illuminate. The LED starts flashing when the battery voltage is too low for normal operation and warns you that it requires changing. This procedure is described below.

Auto power off
In order to save battery life, the probe will automatically switch itself off after approximately 10 minutes. To disable the auto power off function, switch off the probe and switch on while pressing the auto zero button. The red LED will illuminate and the probe will stay on until switched off again.

Auto zero
The output zero offset voltage of the probe may change due to thermal shifts and other environmental conditions. Select the required measuring range and to null the output voltage
depress the Auto Zero button. Ensure that the probe is away from the current-carrying conductor while the probe is being nulled.

Current measurement
1. Switch on the probe by selecting the required measuring range and check that the green LED is lit.
2. Connect the output lead to the oscilloscope,
3. Zero the probe using the Auto Zero button.
4. Clamp the jaws of the probe round the conductor ensuring a good contact between the closing faces of the jaws.
5. Observe and take measurements as required. Positive output indicates that the current flow is in the direction shown by the arrow on the probe.

Battery replacement
The green or red LED will flash when the minimum operating voltage is approached. Use the following procedure:

SAFETY WARNING
Before removing the battery cover, ensure that the probe is disconnected from the oscilloscope and remote from any live electrical circuit.

Unclamp the probe from the conductor, turn it off using the On / Off switch and disconnect the output leads from external equipment. Loosen the captive screw that secures the battery cover. Lift the cover through 30° and pull it clear of the probe body. Replace the battery, re-fit the battery cover and fasten the screw.

1)Accuracy quoted is for conductor in centre of aperture